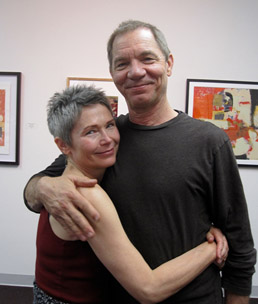 Mixed-media artist Teri Dryden hates clutter, and when stacks of canvases threatened to take over her house, she asked her handy husband Mack if he could build her something to help keep them organized. After designing several prototypes, he hit on an idea that was so practical and revolutionary that Jerry’s Artarama, the second largest online seller of art supplies in the U.S., bought the idea and started manufacturing the Dryden Art & Canvas Keeper.

The hundreds of artists who have discovered it tend to have similar reactions:
“Why didn’t anyone ever think of this before? It’s simple but amazing!”
–Cheryl C., Louisville, KY

“How did I ever live without it?”
–Susie K., Los Angeles

“My husband says my canvases breed like rabbits! He thought he’d have to move out if I didn’t find a way to organize them. The Canvas Keeper might have saved our marriage!”
–Rhonda M., Miami